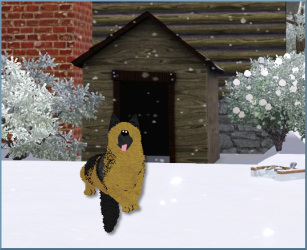 Here at Alegria (pronounced a-lah-GREE-ah) I focus on breeding top quality German Shepherd Dogs for the Petz Kennel Club. While I have been showing German Shepherds off and on since I first got petz in 2004, it wasn't until Alegria was founded in 2009 that I seriously started to show the breed. I show both longhaired and shorthaired varieties, using the Abnormality V3 shorthaired file and the Supernova longhaired file. It is my goal to produce even tempered dogs who excel both in the conformation show ring and in performance events, so all of my dogs will be shown in petz citizen and premier was well as conformation shows.
Alegria is home to 17 German Shepherd champions!

Febuary 1, 2014: Went through and updated all of my dogs' show wins and added some new dogs. Even though Christmas is over, it's still winter so my winter layout will stay up for a little while longer.
December 25, 2013: Merry Christmas! I hope everyone has a wonderful Christmas (or whatever holiday you celebrate)! In honour of the holiday, I've bred Alegria's first public litter! The parents are G3 Ch Dallas x G3 Ch Tamsyn and the puppies are sure to be great show dogs.
December 15, 2013: Site remodel! I decided that Alegria needed a winter/Christmas themed layout. I went through and changed all my dogs' pictures and added some winter pictures to our gallery page. I have two dogs I still have to pose and add and I'll do that soon.
November 9, 2013: Oops, been a while since I last updated. Sorry about that! Went through and updated wins and added new dogs.
July 25, 2013: Added the results from Cloonlara Dogz #23. From now on more detailed updates from shows and stuff can be found under the "News" page.
July 16, 2013: Killian took BOS at Carpe Diem #41, and I added a link to my all breed kennel and cattery, Sun Shower & Finesse, on the links page.
July 5, 2013: I felt that the site was a little too bland and boring, so I remodeled it a bit. In addition to changing the basic layout, I updated all my dogs' pages with new pictures so go check them out.
June 24, 2013: Added show results. Tamsyn finished so she's now CH Alegria Nothing Left But You! I also am proud to welcome our newest addition, "Regina" aka, Amulet Evil Queen, adopted from SteelCrest of Amulet kennels.
June 13, 2013: Updated show results and we have a new champion! Garrin is now CH Peridot I Will Make My Stand! Super grateful to Nikki for allowing me to adopt the gorgeous boy!
May 30, 2013: Added a couple of links to the links page, added three new dogs, and updated some show records. Ahmik and Pyrite now have their XPC titles, Alvar has his GPC title, and Tamsyn and Dallas both took BHM in the very competitive Pastoral Premier!
May 25, 2013: The site is up and running! Keep your eyes open for a litter announcement soon.